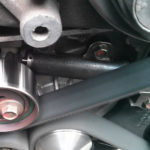 To the average layman with limited mechanical knowledge, the mere utterance of the phrase “timing belt” can produce anxiety. Most have a vague idea that it’s a complicated and expensive repair. In this blog, we’ll discuss what a timing belt does, the negatives of not changing it, and the intervals at which it should be changed.

A timing belt, timing chain or cam belt is part of an internal combustion engine that ensures that the valves will open and close at the proper time for ignition.

Timing belts typically are changed around the 60,000 to 100,000-mile mark, although it’s best to stick to the manufacturer’s recommended replacement interval. If the timing belt breaks while the car is moving, bad things happen. In certain cars with an interference engine,” where the valves could extend into an area typically “swept” by the pistons, it could result in complete engine failure. In practical terms, the car would stop almost instantly and need to be towed away.

Finally, people often ask about the difference between a timing belt and timing chain. In short, a timing belt will require replacement much sooner than a timing chain, but they are typically quieter. A timing chain might last the entire life of the vehicle, or at least 150,000 miles minimum. Of course, these are general guidelines. Any component on any vehicle, new or old, may break at any point.

At Mint Julep Motors, we typically carry more Toyota Corollas than any one particular type of vehicle. On Corollas, we only purchase the 1998 or newer models, mainly because that is the first year Toyota put a timing chain on Corollas. So, if you buy a Corolla from Mint Julep Motors, you can avoid an expensive repair.